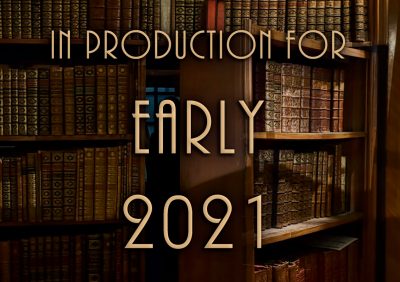 A very happy New Year to all listeners, narrators, friends, and family! We have arrived in 2021. So many of us had a rough ride through the last year, and so here’s hoping that this new year brings us brighter days of adventure and success.

Although much of my own past year was taken up with my own bout with COVID, and then the long path of recovery, I am back to recording, and there are quite a few audiobooks due on the market or queued up for recording very soon. Here’s a preview of what you can expect in the next couple of months.

In Horror, I have four new books for you: From K. Hallows comes Dead Season, a terrific tale of two parents going to battle with one of mankind’s oldest, and hauntingly familiar, foes in order to save their children. It’s quite a thrill ride, and brings some very interesting new ideas to the genre.

From the always outstanding Lee Mountford, I have just completed his series of “Haunted” books, Inside: Perron Manor (a faux Non-fiction prequel to the series), Haunted: Perron Manor, Haunted: Devil’s Door, and Haunted: Purgatory. If you know are a fan of bone-chilling supernatural horror, you will love these. The e-books and paperbacks are already available, and the audio will be with you in just a few weeks.

I have a couple of Comedy titles making their way through pre-release. The Odd Job by Bernard McKenna and Colin-Bostock Smith is a crazy 1970s roller-coaster ride, and was originally filmed with Python’s Graham Chapman and comedy legend David Jason. I’m also completing final edits on A Book About Bob, the comedy debut novel of spies and pies from J. L. Newman.

In Urban Fantasy, I’ll be finishing my Kent-based travels with the final Eddie Lancaster/Arcane Inc. books from Sean Stone, Dead Warlock (Book 5) and Undead Warlock (Book 6), and also the final installment of the Viventium trilogy by D. O. Thomas, Out of the Shade.

For fan’s of lusty historical intrigue, I’m currently recording book three of the Dominus series by J. P. Kenwood (which began with Dominus and Games of Rome), Blood Before Wine. Watch for this releasing sometime in March.

Also coming up, I will be recording horror classics The Birds by Frank Baker, Vathek by William Beckford, and Vampires: Tales of the Supernatural, by Alexis Tolstoy.

Watch for all this and more coming in the next few months, and don’t forget to sign up for my newsletter if you’d like release announcements and other news and offers. Have a terrific start to the year, wherever you are!